LS Lowry painting Steps at Wick to be auctioned 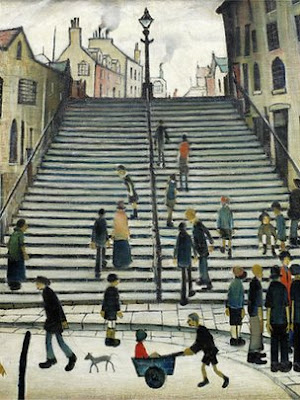 A painting of a Caithness town by Laurence Stephen Lowry is expected to sell for up to £800,000 at an auction in London later this year.

Steps at Wick was painted in 1936 and shows the Black Stairs in Wick's Pulteneytown area.

Auctioneers Bonhams said it was the first time in years that the painting had become available for sale.

Lowry, who grew up in Salford, was famous for his matchstick figure art and was a regular visitor to Scotland.

Other examples of his work are being exhibited at the Tate Britain gallery in London.

Penny Day, of Bonhams, said: "We are privileged and delighted to be offering such an important, striking Lowry which has not been available for over 20 years.

"With the market for the artist stronger than ever and alongside the interest in the current Tate exhibition, we expect collectors will seize the opportunity to acquire this early tour de force."

His art created in the Highlands included a sketch of the Turnpike, a two-storey building in the Fisherbiggins area of Thurso.

Along the coast at Wick he painted the Black Stairs, a flight of Caithness flagstone steps built in the 1820s.

He is best known for his paintings of industrial landscapes.

Engineer Thomas Telford led the planning for Pulteneytown for the British Fisheries Society amid a boom in herring fishing off the far north east coast of Scotland.

Wick was Europe's largest herring port from the 18th until the early 20th Century.

Pulteneytown was named after Sir William Pulteney, a governor of the society.

LS Lowry has the record for the person to refuse the most honours, turning down five between 1955 and 1976.

These included an OBE in the 1955 Birthday Honours List and a CBE in the 1961 New Year's List.

His life and work is celebrated in the 1978 Brian and Michael hit song Matchstalk Men and Matchstalk Cats and Dogs.