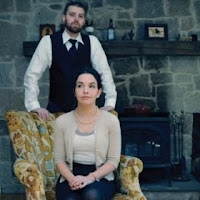 Dancy are a Connecticut-based duo comprising of Dan Garaffa (vocals, acoustic guitar, bass, percussion) and Nancy Michaud-Wozniacki (vocals, ukulele, percussion), who met as members of rock / fusion band Organic Chemistry, and decided they wanted to do something a little different. On “Stories”, their debut collection, they take a rootsy, Americana-based approach to their songs and performance, and the results are often bewitchingly good. Michaud-Wozniacki is in possession of a pristine old-school country voice that will remind some listeners of artists like Iris DeMent and Laura Cantrell, and they contrast well with the earthier, less polished tones of Dan Garaffa. They share lead vocal duties and sing back-up to each other.

Though primarily a duo, they joined on “Stories” by guitarist Ed Sabourin, Tim Braun on keyboards and accordion, and drummer Kevin Hugh; and their contributions raise the bar considerably, filling out the sound and providing a dynamic base for the songs to thrive. Garaffa opens the album with “Big City Blues”, a classic down-at-heel country blues, followed by Michaud-Wozniacki’s delightful “I Guess I Won't Forget”. On “Today and the Rest of Our Lives” Garaffa takes lead again, though ably supported by Michaud-Wozniacki, and the gently off-kilter arrangement and the hint of fear in the presentation, brings to mind Nick Cave’s Bad Seeds at their most southern-gothic and country.
www.facebook.com/Dancymusic
www.dancy.bandcamp.com/stories
Dancy CD Baby Page
Phil S.