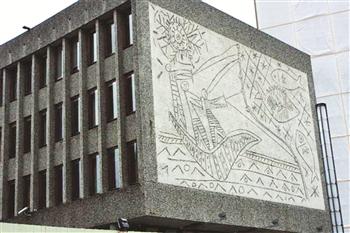 The fate of five Picasso murals on buildings damaged in the Anders Breivik bombing in Oslo in 2011 has led to a heated debate in Norway.

A panel of experts has recommended demolishing the buildings and removing the murals.

But art experts say that as the murals were designed by Picasso for those specific buildings, they should remain where they are.

The artworks were Picasso's first attempts at concrete murals.

The murals were drawn specifically for the government buildings known as H and Y block.

Picasso's designs were sandblasted onto the concrete both outside and inside the buildings by the Norwegian artist Carl Nesjar.

Both buildings were damaged when Breivik set off a van bomb at the foot of H block in July 2011.

It was the start of a series of attacks that left 77 dead, mostly teenagers on the island of Utoeya.

The blast in Oslo killed eight people and badly damaged the H block, along with neighbouring ministries.

A panel of experts has decided the most economical solution would be to demolish the buildings, cut the murals out and place them elsewhere.

A recent poll by Norwegian newspaper Verdens Gang showed public opinion was divided, with 39.5% supporting demolition, while 34.3% thought the buildings should be kept.

Artist Dag Hol was widely quoted as saying it was a "golden opportunity" to get rid of "brutal, ugly and degrading architecture".

But Joern Holme, head of the Directorate for Cultural Heritage, said the buildings were historically important - architecturally, politically and artistically.

"We can't demolish the best (parts) of a cultural era just because we find it ugly today," he said.

Norway's government has until early next year to decide what to do about the buildings.

The rights to the murals are owned by the Picasso family and they must be consulted on what happens to them.

Claudia Andrieu, a legal expert with the Picasso Administration, said they have not been approached yet but are "open to dialogue".