Review: The Lady Crooners – The Surface

The Lady Crooners – The Surface (Independent) 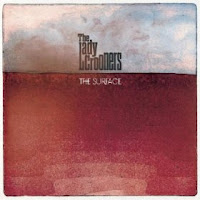 Formed in 2010 by songwriting siblings Nadia and Joseph Krilanovich, the duo were soon joined by sister Megan, and are accompanied by Kevin Conness on lead guitar, and Jason Braatz on bass. They released their self-titled debut in 2011 and their sophomore collection “The Surface” arrived in June this year.

Based in San Francisco, they play a heady mix of old school country, rootsy folk and back-porch Americana. As with many sibling groups, harmony vocals are at the fore and the arrangements, and their overall approach to their musical craft, draws comparison to Gillian Welch, Emily Barker and the Civil Wars.

I’m sure they’re comparisons that the group won’t object to, especially as “The Surface” is hardly in thrall to any individual or specific influence, and the original songs stand up to proper scrutiny. Indeed standout tracks tumble from the speakers one after the other, and launch track “Mercy” impresses immediately. The vocals are sublime and the chorus sticks around long after the song has ended.

It’s followed by “Negotiation”, a charming song, distinguished by jangly acoustic guitar, and wonderful voices. The title track continues the run with a gentle certainty and a mountain folk purity that is beguiling. Have a listen, should you get the chance.
www.theladycrooners.com
www.facebook.com/theladycrooners
www.reverbnation.com/theladycrooners
The Lady Crooners CD Baby Page
Phil S.