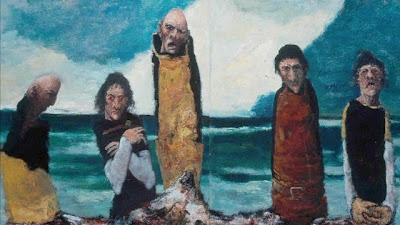 The artist John Bellany has died at the age of 71.

One of Scotland's best-known artists, he was born in the fishing community of Port Seton in East Lothian.

He trained at the Edinburgh College of Art and then in London. His works were exhibited and collected around the world.

He moved to Italy after a period of ill health. His family said he died on Wednesday evening, in his studio, with a paint brush in his hand.

A statement on his official website said: "It is with great sadness that we announce the passing of a true Scottish giant.

"At seventeen minutes past seven on the evening of Wednesday August 28 John passed away, in his studio, surrounded by his family.

"He was clutching a paint brush in his hand as he took his final breath.

"His passion was life and he painted as if each day was his last."

Bellany was born into a family of fishermen and boat builders at Port Seton in 1942 and much of his work is said to draw inspiration from his coastal roots.

Bellany successfully underwent a liver transplant in the 1980s and was made a CBE in 1994.

He had suffered three heart attacks, including one outside his own exhibition in Glasgow, but even that informed his work.

His paintings feature in the collections of galleries including the National Galleries of Scotland, Tate Britain in London and the Museum of Modern Art in New York.

Sir John Leighton, director general of the National Galleries of Scotland, said Bellany would be celebrated as one of the greatest Scottish artists of the modern era.

He added: "From his early, heroic depictions of fisherfolk on the Scottish coast to the vibrant, passionate images of his later years he gave visual form to the big themes and narratives of human life.

"The retrospective show at the National Galleries last autumn demonstrated how he was able to use the drama and crises of his own life as a starting point for powerful explorations of man's struggle with fate and, as he entered his seventies, it seemed as if he was still at the top of the game.

"We are extremely sad to hear of his death but his art will remain an inspiration to artists long in to the future."

First Minister Alex Salmond paid tribute to the painter as "one of Scotland's finest artists" and an "outstanding" person.

"He led an extraordinary life which was both marked by personal illness and tragedy while also filled with joy and passion," Mr Salmond said.

"He always had an abiding spirit which made him such excellent company. He was also committed to great causes and he donated a wonderful painting, a feast of colour depicting Macduff Harbour, as the subject of the First Minister's Homecoming Christmas card in 2008.

"Following its auction, the proceeds were donated to four charities, including the RNLI as respect and support for seafaring communities was one of John's passions and an inspiration for his talent.

"His work was acclaimed both in Scotland and around the world and my condolences go to his friends and family."