Review: Scott Jardin – Round The World

Scott Jardin – Round The World (Independent) 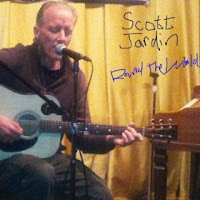 Born and raised just outside Boston, Scott Jardin lived for a while in central and western New York, and is now resident again in Massachusetts. Musically, his roots are anchored deep in the Americana tradition and include a myriad of influences, from jazz and blues to folk and bluegrass. He’s also toured as a member of Dartmouth Aires, an a capella group, and that’s some indication of Jardin’s eminently likeable singing voice. It’s an instrument he puts to fine use on “Round The World”, his latest collection of songs that touch on both the personal and political.

His easy vocal style falls somewhere between James Taylor and Don McLean, and is perfectly apposite to both his songs and his intimate acoustic sound. Listen carefully to “Round The World” and the sensation that Jardin is in the room, strumming gently in the corner is undeniable, and it’s a credit to the production team. The title track provides a remarkably apt statement of intent. Arriving after a short introductory piece, Jardin’s warm, personable tone flows soothingly from the speakers, engulfing the listener in the song. On “Midrange” he utilizes a much fuller production with percussion and electrics, and it’s no less enjoyable, and “Honae” plots an unexpected abstract blues course. The album comes with two long bonus tracks, “Constant State” and “Roads and Walls”, and the latter is particularly interesting with an ambitious arrangement. An indicator of a new direction, perhaps…
www.scottjardin.com
Scott Jardin CD Baby Page
Phil S.