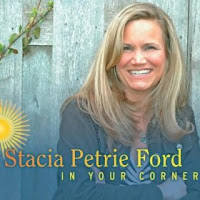 A stalwart of Detroit’s acoustic rock and blues scene since the early ‘90s, Stacia Petrie Ford has racked an impressive list of nominations and awards, and released a succession of well received albums; both under her own name, and with her group, Detroit Women.

On her new collection “In Your Corner” there’s a strong singer-songwriter element at the fore, which defines the sound of the album, and allows Stacia the freedom to explore a variety of roots genres without sacrificing her own artistic character or the record’s intrinsic identity. Put simply, “In Your Corner” sounds like a Stacia Petrie Ford record, whether she’s playing blues, folk or country inspired styles.

When she plays the blues, on “Stew in My Blues” and the funky “Love's Got to Win Out” she’s utterly enthralling, and best of all is the concluding track, the faultless “Helpin' You Ain't Helpin' You (Part 2)” where she brings everything together – great guitar, too.
www.staciapetrie.com
Stacia Petrie Ford CD baby Page
Phil S.