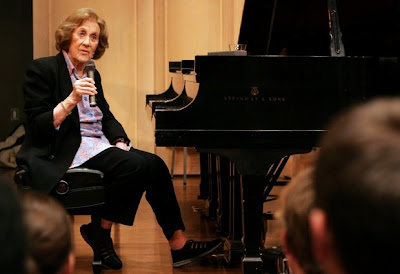 British-born pianist Marian McPartland, who became a fixture on the US jazz scene, has died aged 95.

For more than 40 years, the musician also hosted a US radio show, giving listeners an insight into the elusive topic of jazz improvisation.

Born Margaret Marian Turner in Windsor, she started out entertaining troops during WWII and married US soldier and cornetist Jimmy McPartland in 1946.

She died of natural causes at her home in Long Island, New York.

McPartland said she had been drawn to the piano at the age of three, after hearing her mother play.

"From that moment on, I don't remember ever not playing piano, day and night, wherever I was," she told US broadcaster NPR in 2007.

She studied classical piano at the Guildhall School Of Music but, to her family's disappointment, left the course and her home to tour with a vaudeville act aged 17.

"My mother said, 'Oh, you'll come to no good, you'll marry a musician and live in an attic'," she recalled. "Of course, that did happen."

After she married McPartland, whom she met during the war while playing a jam session in a tent on the Belgian border, the newly-weds moved to Chicago in 1946.

She played with her husband's band for a time but his traditional Dixieland style held less appeal than the adventurous sounds emanating from New York, where the couple resettled in 1949.

There, McPartland tracked down one of her idols, bebop pianist Mary Lou Williams, and began to engage with the jazz scene.

She succeeded despite the "three hopeless strikes against her," as critic Leonard Feather put it 1951: She was British, white and a woman. 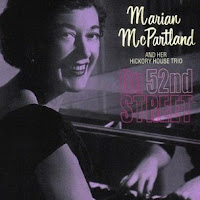 In an essay included in McPartland's collected works, You've Come a Long Way, Baby, she wrote about the prejudice she faced at the start of her career.

"Once a man stood at the bar watching me intently, and when the set was finished he came over and said with a smile, 'You know, you can't be a respectable woman the way you play piano'," she wrote.

"For some reason or another, this struck me as a great compliment."

In 1950, she took a resident job at New York's Embers Club, and two years later began an almost uninterrupted eight-year run at the Hickory House.

A recording from that era, Jazz At The Hickory House, is one of the musician's most celebrated albums, showcasing her sophisticated but swinging renditions of standards such as Mad About The Boy and Let's Call The Whole Thing Off.

Her band at the time featured drummer Joe Morello - later to earn fame for his dynamic work with Dave Brubeck - and McPartland also recorded with the likes of Dizzy Gillespie, Carmen McRae and Shirley Horn.

She wrote "about 50" original songs, but claimed to lack confidence in her abilities.

"I couldn't stand criticism," she said in 1981. "So whenever we played something I had written, I would announce it as something written by, for instance, Walter Bishop Jr.

Nonetheless, her compositions were recorded by the likes of of Tony Bennett, Peggy Lee and Sarah Vaughan.

In 1969, disenchanted with the music business, she formed her own record label, Halcyon, and released albums by Teddy Wilson and Earl Hines, as well as her own works.

"It was quite a job," she said. "I used to actually go to a record store like Sam Goody and tell them, 'I need that money you owe me'."

Her marriage to Jimmy McPartland ended in 1967 after two decades - his drinking and her affair with Joe Morello contributing to the break-up.

But they remained close friends, sometimes playing together, and they even remarried two weeks before his death from lung cancer in 1991. "Our divorce was a failure," she had joked.

However her official biographer, Paul DeBarros, contends her career blossomed after the relationship ended.

"Everything we know about Marian McPartland today - her radio show, her series of albums on Concord Jazz, her prescience about the importance of a jazz education and, perhaps most important of all, her powerful public advocacy for jazz, happened after her divorce," he told the Seattle Times.

McPartland started her broadcasting career in 1968, on New York's WBAI-FM.

She played her favourite songs - her top five included Chick Corea's Now He Sings, Now He Sobs and Frank Sinatra's In the Wee Small Hours of the Morning - interviewed musicians and talked with rare clarity about the intricacies of jazz music.

She moved to NPR in 1978, hosting the nationally-syndicated Marian McPartland's Piano Jazz, described as "a relaxed, one-on-one hour of music and conversation".

Over the next 33 years, she interviewed more than 500 artists from Mel Torme to Elvis Costello. But the focus, as the title suggested, was on jazz pianists - with whom she would often duet live on air.

The show received a Peabody Award in 1983 while over her career, McPartland was invited to play for two US presidents and was recognised with a lifetime achievement Grammy in 2004.

She never renounced her British citizenship and was appointed OBE in 2010.

The musician continued to perform into her 90s, even after arthritis made it difficult for her to walk.

"I can't walk. I'm in miserable pain. But at the piano, I don't feel a thing," she said during one appearance.
She died at home on 20 August, NPR said in a statement.

Her survivors include two grandchildren.