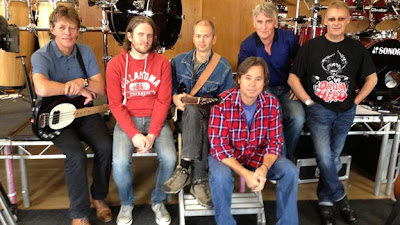 Veteran Celtic rockers Runrig are preparing to hold a weekend event in the Highlands to mark the band's 40th anniversary.

Put together in 1973, the band enjoyed UK chart success with Gaelic songs in the 1990s.

Their song An Ubhal as Airde reached number 18 in the charts in 1995.

Runrig's Party On The Moor will be held at the Black Isle Showground in Muir of Ord, near Inverness, on Friday and Saturday.

About 17,000 people are expected over the two days.

Support acts include Manran, Washington Irving, Scooty and the Skyhooks and Gizzen Briggs.

The original Run-Rig Dance Band performed for the first time as a three piece at Glasgow's Kelvin Hall.

In 1991, the band played to 50,000 people at a music festival at Balloch Country Park on the shores of Loch Lomond.

Six years ago, 17,000 fans turned out to watch Runrig play its Beat the Drum Festival at Drumnadrochit.

Hours of rainfall turned the festival field into mud and tractors had to be brought in to tow fans' vehicles from the car park.

Runrig have a loyal following in Denmark and Germany and played support to U2, The Rolling Stones, Rod Stewart and Genesis.