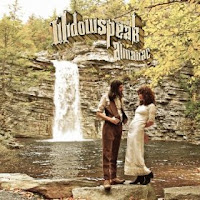 Hammered strings and rainfall awakens “Perrenials”, the opening track of “Almanac”, the second collection from Brooklyn duo Widowspeak. From thereon tracks are led by the breathy, delicate and utterly feminine vocals of Molly Hamilton (a good comparator would be The Cardigans’ Nina Persson) to which Robert Earl Thomas adds guitar and other strings.

Their influences are drawn from a number of sources. The album cover suggests a retrospective bent and a self-proclaimed homage to Wings, Simon & Garfunkel and Carpenters records, with the naturally set portrait of the pair eyeing one another in their vintage finery!

Musically however they lean more towards an indie / shoegaze stance (“Sore Eyes” is like a less dreamy and otherworldly Cocteau Twins and post-Bunnymen riffs can be heard in track three) yet they tap into a rich seam of soft rock a la Fleetwood Mac (“Dyed in the Wool”) and add occasional folk flurries - like the use of autoharp on tracks such as “Thick as Thieves” and “Minnewaska” - and country slide (”Ballad of the Golden Hour”).

A quite lovely and friendly album – I particular like the fact they titled the album after the 45 second instrumental centrepiece - with only the occasional harder edges working less in their favour.
www.capturedtracks.com
Willsk