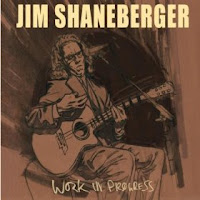 A singer-songwriter, a multi-instrumentalist, a solo artist and a sideman – one can’t help but feel that music plays an integral part in Jim Shaneberger’s life. “Work In Progress” is his debut solo record and represents his first opportunity to not only showcase his songs but also his undoubted prowess on a number of instruments; drummer (and friend) Karl Schantz is the only other musician that contributes to the 10-track collection.

Recorded in his home state of Michigan where he’s established himself as an in-demand bass guitarist and vocalist, Shaneberger has employed the experience gained playing with artists like Greg Nagy and Donald Kinsey to realize his own musical vision. The blues provide the central core to his sound, though he’s happy to explore a variety of associated styles from funk and soul to rockier territory. Whatever his approach, it’s an album with plenty of swing, and Shaneberger’s vim and vivacity shines through, throughout.

He’s on fire from the first bars of opening cut “One More Chance”, a full-on, Stevie Ray Vaughan-esque blues-rocker, with plenty of stinging guitar. “Running Your Mouth” arrives on an infectious rolling rhythm; the song’s underlying menace is exposed lyrically at every opportunity and Shaneberger’s guitar is dirty and fractious – great stuff! Equally, when he turns his hand to poppier, more soulful fare - “Trouble” springs to mind – he nails both the sentiment and the execution.

All in all, a rock-solid blues-based record that delivers a whole lot more than its title suggests. I’m already looking forward to his next outing.
www.facebook.com/jimshanebergermusic
www.reverbnation.com/jimshaneberger
Jim Shaneberger CD Baby Page
Phil S.