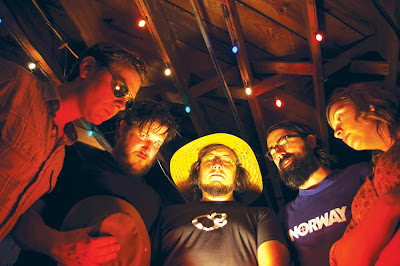 Wooden Wand are delighted to announce a European tour with full band for April 2013. James Jackson Toth hits the road with the musicians with whom he created his latest masterpiece Blood Oaths of the New Blues, who had also joined him previously for the staggering Briarwood LP. The band is made up of David Hickox, Janet Elizabeth Simpson, Jody Nelson and Brad Davis, with harmonium, organ and disembodied vocals being the order of the day.

You can listen to the track "Dungeon of Irons" here. James Jackson Toth says this about the song:

"'Dungeon Of Irons' was inspired directly by the book Last Words Of The Executed, edited by Robert K Elder. The book collects the last words of people executed by the state, from the Salem witch trails to the present day, and the quotes range from the very funny (really!) to the very poignant. A lot of the lyrics in the song are taken directly from those last words. You can call it an anti-death penalty song if you like, but I tried to keep it as non-judgmental as possible and focus on the illogical and archaic concept of 'eye for an eye' vengeance in general. In the great tradition of rock and roll, I've opted not to formally credit any of the dead people I've 'borrowed' lyrics from - ha ha ha. Seriously though, check out the book - it's terrific."

Blood Oaths Of The New Blues is the Sunday morning 'wake and bake' record to last year's critically acclaimed Briarwood LP's Saturday night revelry. With his once-every-five-years proper rock and roll record out of his system, James Jackson Toth - AKA Wooden Wand - retreated back to Alabama to record this spooky, heady follow-up, an album that demands close attention. This is music for quiet reflection and shares a worldview more in line with noise and doom metal artists than it does summer of love casualties and beach burnouts. Every Wooden Wand album trounces expectations, and Blood Oaths Of The New Blues, thankfully, doesn't break that trend.

Praise for Blood Oaths of the New Blues

“this is the sound of one musician's prolific and mercurial path, reaching delightful new highs.” Pitchfork 7.9

“It’s folk, yes, but with wickedness instead of a waistcoat.” Q

“James Jackson Toth’s ruminations on morality and life in general are as thought-provoking as ever and his music as gorgeous.” Soundblab – Album of the Week