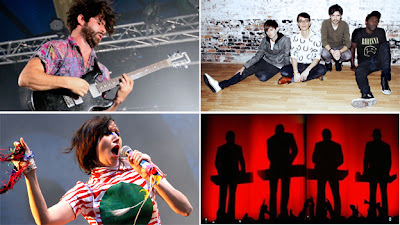 Kraftwerk, Foals and Bloc Party have been named as the headline acts for the 2013 Latitude Festival in Suffolk.

The festival, which takes place on 18-21 July at Henham Park near Southwold, will also feature comedians including Daniel Kitson and Dylan Moran.

For the first time, BBC 6 Music has a stage at Latitude and will host acts including Alt-J, Modest Mouse and Beach House.

It will be the eighth year that Latitude, which prides itself on being "more than just a music festival", has been held on the Suffolk coast.

The first announcement of acts also includes cabaret courtesy of The Horne Section, a celebration of David Bowie from the Institute of Contemporary Arts, an appearance from artist David Shrigley, poetry from Tim Key and talks from Germaine Greer and Alan Moore.

German electro pioneers Kraftwerk head to Suffolk on the back of a successful eight-night retrospective at London's Tate Modern.

Melvin Benn, managing director of organisers Festival Republic, said: "We're delighted to welcome the forefathers of electronic music, Kraftwerk, to Latitude with their 3-D show who, along with Bloc Party and Foals, will headline an incredibly strong music programme that already includes some of 2013's hottest acts."

BBC 6 Music presenter Steve Lamacq said Latitude, which has a capacity of about 35,000 people, was a "magical" festival.

"I love the surroundings and the setting for Latitude," he said.

"It's an incredibly popular festival with 6 Music listeners, especially with this year's line-up which includes innovators like Kraftwerk and bands I've championed down the years like Bloc Party and more recently Alt-J."