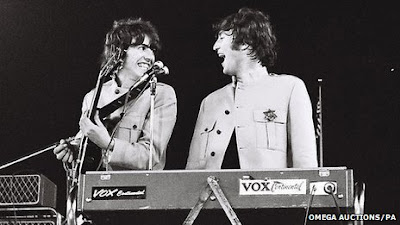 Pictures of The Beatles' 1965 Shea Stadium concert, taken by an amateur photographer who bluffed his way backstage, have sold for £30,000.

Marc Weinstein used a fake press pass to get next to the stage for the historic New York show.

The only other photographer present ran out of film during the gig.

Shea Stadium was The Beatles' biggest concert - and the biggest ever pop concert by any group up to that date.

It came at the height of Beatlemania and the band's music was famously drowned out by the screams of the 55,000-strong crowd.

Weinstein later recalled how he used a home-made press pass to con a policeman into escorting him to the stage area.

"I just blended with everybody there," he said. "I had a method of operation; I just acted like I belonged. Anybody in authority, I would look the other way."

Auctioneer Paul Fairweather said the successful bidder was "a South American gentleman currently living in Washington [who] is a huge collector of Beatles memorabilia".