Abbey painting 'is Rembrandt self portrait' 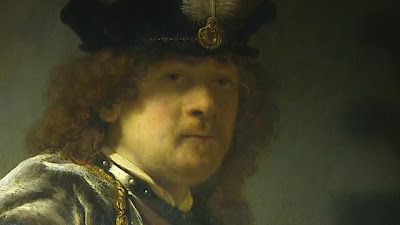 A painting on display in the former home of Sir Francis Drake may be a self-portrait by the Dutch Master Rembrandt valued at close to £20m.

For decades the work showing Rembrandt aged 29 was thought to have been painted by one of the artist's pupils.

But leading expert Ernst van de Wetering has re-attributed it as a work by the 17th Century painter himself.

If confirmed, the painting - given to the National Trust in 2010 - will be the only Rembrandt held by the charity.

It has been at Buckland Abbey in Devon since 2010, where it will remain for another eight months before being sent for further research and examination to shed more light on its attribution.

Dated 1635 and "signed" by Rembrandt, it has been shrouded in mystery for 40 years after Rembrandt specialist Horst Gerson suggested in 1968 it may have been painted by one of the artist's pupils.

Members of the Rembrandt Research Project came to the same conclusion when they examined the painting that same year, publishing their findings in 1989.

Art historian Van de Wetering - who is also the chairman of the Rembrandt Research Project - said experts decided it was most likely to have been painted by one of Rembrandt's pupils because of what was known of the painter's style in 1968.

"But over the past 45 years we have gathered far more knowledge about Rembrandt's self-portraits and the fluctuations in his style," he said.

The National Trust said the new analysis by van de Wetering, based on an X-ray of the painting published in 2005 and newly found circumstantial evidence, "remarkably increased the likelihood it was by Rembrandt himself".

Van de Wetering examined the painting again at Buckland Abbey and said he saw the same crude brushwork and painting technique observed in other Rembrandt pictures of that period, leading him to assert it was by the Dutch Master.

Jez McDermott, National Trust property manager at Buckland Abbey, said: "It's amazing to think we might've had an actual Rembrandt hanging here on the walls at Buckland Abbey for the past couple of years.

"We never dared think it might actually be an original, and many of our visitors will have just passed by it in what is sure to be a real contrast to the attention it is now going to receive."

David Taylor, curator of paintings and sculpture at the National Trust, said: "Rembrandt was one of the great artists of the so-called Dutch golden age.

"He produced a huge number of self-portraits throughout his career, partly because he had a ready subject matter in himself, through which he could develop his painting technique but also because, as he was already famous, the finished images were highly desirable pictures for collectors.

"This portrait is now one of our most important works of art and will be the only Rembrandt in the National Trust's collection of approximately 13,500 paintings."

In the 91 x 72 cm portrait, Rembrandt is wearing a black velvet cap with two ostrich feathers, a decorative metal band worn round the neck and a short, decorated velvet cape.

The self portrait has been given a value of £20m, although as the trust holds items on behalf of the public, it said it can never be sold.

A full technical analysis, funded by £20,000 from the People's Postcode Lottery, will include X-rays, examination of paint pigments, infrared testing to examine any drawing under the painting and tree-ring dating of the beech panel it is painted on.

Rembrandt Harmenszoon van Rijn, who died in 1669 aged 63, is widely regarded as one of the most prolific self portraitists, thought to have painted 40-50 pictures of himself in oils and used himself as a model in 32 etchings and seven drawings.