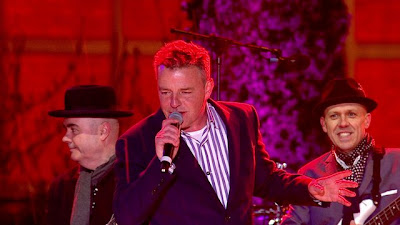 Madness brought the curtain down on BBC Television Centre with a concert outside the iconic building on Friday.

The ska band played a mixture of old songs and new tracks in front of the venue, which is closing its doors on Easter Sunday after 53 years.

The show was screened live on BBC Four and was followed by a special programme where a host of stars share TV Centre memories.

Madness said they were "honoured" to be chosen to play the farewell gig.

A statement from the band, who shot to fame in 1979 with their cover of ska legend Prince Buster's One Step Beyond, read: "We've played at some exciting places in London lately but the closing of BBC TV Centre... well... that is close to our hearts.

"As a band we grew up there, those walls have plenty of Madness tales to tell, a sad day, the end of an era. Oh, but what a celebration."

Before they played their set in front of a selected audience - with many others gathering outside the building's gates - Madness appeared on The One Show recalling their favourite TV Centre moments.

The 1960s building in west London, once the home of Top of the Pops and Blue Peter, was sold for £200m. It closes on 31 March and will be redeveloped into a hotel, flats, a cinema and office space.

The transition to the corporation's new London home, New Broadcasting House, in central London, began in 2012.

The programme featured interviews with some of the biggest names to perform at the venue, including Sir David Attenborough, Penelope Keith, Ronnie Corbett, Sir Michael Parkinson, Sir Terry Wogan and Sir David Jason.

At the scene: John Hand BBC News, at Television Centre

"I never thought I'd miss you half as much as I do."

If an emotional - but fun - send-off was required for TV Centre's final night, after 53 years of live broadcasts, who better to provide the soundtrack than Madness, who have officially become the house band of Britain's big occasions.

The Nutty Boys have provided many moments of mischief in the studios and corridors of this famous building - Suggs boasted on stage they had been banned from every BBC show they had appeared on. They mixed their biggest hits with many comic references to the entertainment ghosts that will remain here.

The remaining staff who crowded the windows and balconies to look down on the rain-soaked gig in the horseshoe car park were referred to as zombies and given a friendly wave.

On Wood Lane itself the crowd who could not get in danced and sang along and the car drivers who normally whizz by crawled to a halt to take in the scene.