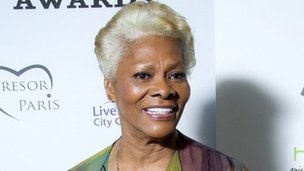 Dionne Warwick has filed for bankruptcy in the US after amounting debts of almost $10 million (£6.6m) in taxes since 1991.

The singer's liabilities include nearly $7m owed to the IRS (Internal Revenue Service) from 1991 to 1999 and more than $3m in business taxes owed to the state of California, where she lives.

Her publicist said she had been the victim of poor financial management.

He added that Warwick had paid back the actual amount of the taxes but not penalties and interest that had accumulated over the years.

In documents filed in her home state of New Jersey this month, the singer of such classics as I Say A Little Prayer listed about $21,000 (£13,800) in monthly income and a similar amount in monthly expenses.

Her publicist said she had "repeatedly attempted to offer re-payment plans and proposals to the IRS and the California Franchise Tax Board for taxes owed".

Warwick, cousin of the late Whitney Houston, won her first of five Grammy awards in 1968 with Do You Know The Way To San Jose?

She has sold more than 100 million records and has enjoyed more charts hits than almost any other female singer.

Last March, Warwick celebrated 50 years in show business with a special event at the Grammy Museum in Los Angeles.

To mark the anniversary she released Now, an album featuring new versions of some of her most famous songs.