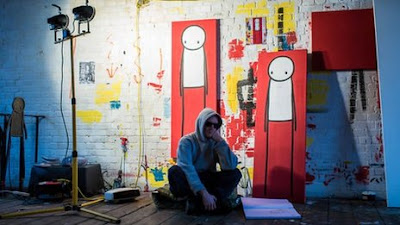 Street artist Stik, known for his graffiti portraits of stick people, is to give away posters of his art in the Big Issue magazine.

A run of 75,000 will be printed in four different colours and be available only from Big Issue sellers across the UK.

"I wanted to put the art in the hands of homeless people" he told the BBC.

The graffiti artist, whose work is mainly seen around east London, has funded the project using money donated from an advertising agency.

"It is me giving something back to the people the on street who helped me to get by when I was homeless," he said.

He hopes the project will encourage people to interact with homeless people and empower the Big Issue vendors.

"This is street art and it makes sense that people who have dealership are on the streets" he added.

The magazine's project manager Silja Nyboe Andersen said: "We loved that we could make Big Issue sellers art dealers for a week."

Stephen Robertson, chief executive of the Big Issue Foundation, said it was "a terrifically generous act" and "a powerful statement from an artist".

In the last two years, Stik's fame has grown with celebrity endorsements and rising auction prices. Christie's recently sold one of his paintings for more than £6,000.

His prints were given to nominees at the 2011 Q Awards including Queen guitarist Brian May, rapper Tinie Tempah and U2 singer Bono. May then asked him draw his stick man portrait and to do a mural in his garden.

The posters, some of the which will be signed by the artist, will be available in four colours from 11 March.