Dlugokecki is a musical project fronted by Ben Dlugokecki (pronounced- Der-loo-go-ken-ski) – A talented 31-year-old prolific singer/songwriter based in Southampton. Their music has been compared to the likes of David Gray, Paul Simon, Elbow and Damian Rice. Five of their biggest shows to date were supporting million-selling artists David Gray, Snow Patrol, Corinne-Bailey Rae, The Proclaimers and LuLu on their world tours, playing to thousands of people.

In 2012 the band completed their most ambitious project, the ‘Tracks Tour’. This involved playing 5 village halls across the UK, and 11 other live shows. This coincided with the bands album ‘Putting the Tracks in Front of the Train’. The band released their 2nd album of 2012 in October – ‘Forty-Eight’. The album was written, recorded, produced and mixed all within 48 hours. In 2013 a follow-up to Forty-Eight (part 2) has been announced, alongside a live album to be partially recorded at the Cookie Jar show!
www.dlugokecki.net 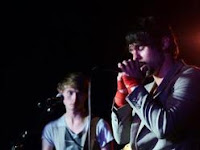 The Deli’s Mix
The Deli’s Mix originally formed in August 2009. Their first show, in September 2011, was at the Shed in Leicester as an audition for Glastonbudget (the biggest tribute/new acts festival in Europe) and they were succesful. They recieved amazing feedback and have gained a large Facebook following since. The band are influenced primarily by Red Hot Chili Peppers, Foo Fighters, Muse and Jimi Hendrix. Their music is rich and powerful but also catchy and easy to listen to. It’s clear that they are a band who prides themselves on musicianship, professionalism, skill and showmanship.
www.facebook.com/thedelismix

Martha Bean
Songstress Martha Bean is making a name for herself winning crouds over with her “fingerpicking wizardry and pitch-perfect falsetto”. Her introspective songs and strong intricate vocals can be heard amongst the chordal tones of artists such as Radiohead and Jeff Buckley. She has recently supported Seth Lakeman, Scott Matthews and Jersey Budd.
www.marthabean.co.uk