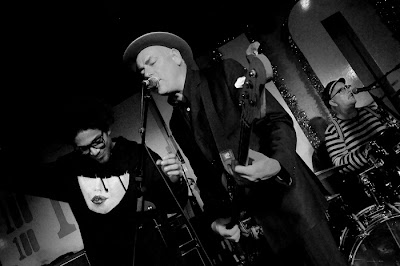 Wildly and quite rightly regarded by those that know as one of the greatest punk bands of all time, The Ruts enjoyed three whirlwind years of success and a string of hits including ‘In A Rut’ (their debut single, released by reggae band Misty In Roots, sharing a common fight against racism and the National Front), ‘Babylon’s Burning’, ‘Something That I said’ and ‘Staring At The Rude Boys’ before releasing their now classic album ‘The Crack’ in 1979. Blessed with the musical talent to fuse angry street punk rebel anthems with bass heavy dub and reggae, The Ruts huge potential was cut short when singer Malcolm Owen tragically passed away in 1980.

Despite still reeling from the death of their frontman, the remaining members were not prepared to give up music and Ruts DC were formed in 1981 by drummer Dave Ruffy, bassist John 'Segs' Jennings and guitarist Paul Fox.

First they created the highly underrated ‘Animal Now’ album (reissued for the first time this year on CD) and then, embracing their strong early roots reggae and dub influences they released ‘Rhythm Collision Vol. 1’, recorded and mixed with the then relatively unknown dub specialist Mad Professor.

Since this time, both Ruffy and Segs, (who have been described as Europe's Sly and Robbie, no small boast considering their playing skills are matched by their far ranging production skills!) have had wide and varied careers both in live bands and in the studio but on the 16th July 2007, The Ruts reformed for the first time in 27 years for a one off benefit for Paul Fox, the original guitarist, following his diagnosis with lung cancer. Henry Rollins took over vocal duties and The Damned, Misty In Roots, UK Subs, Tom Robinson, John Otway and more supported them. This was described as ‘the best punk gig of all time’ by the Times and proved the rhythm section as strong as ever.

It’s a night that will remain in London gig legend forever.  And that, they thought, was that….until now.

The Ruts DC are very proud to announce the release of ‘Rhythm Collision Volume 2’ released officially on May 13th.

“The last thing on our minds was to reactivate Ruts DC. It just sort of happened.” recalls Segs. “We went to see Neil Fraser aka Mad Professor who we’d worked with on ‘R.C Vol 1’. We hadn’t seen him for a while, but when we started talking about the original record, Neil said, ‘Yeah, we should do another session sometime – how about next Tuesday?’ It was as simple as that.  We had some lyrics and a couple of ideas, so we agreed to do it and basically plugged in and played.”

“We adopted very much the same approach as we had at the ‘Rhythm Collision Vol. 1’ sessions,” continues Ruffy. “By the end of it we had the basics of fourteen tracks; very vibey, groovy stuff.”

“The album really came together by a series of fortunate events, before we knew it we were back in the studio for ‘The Great day of Vocals - Segs , Ngoni (aka Delbert McKay, Misty’s guitarist/vocalist), gifted lyricist Aynzli Jones, Brixton lyrics man Tenor Fly and Rob Love, front man with Alabama 3 all turned up, tuned in and came up with the goods. Nothing was pre-conceived or planned.”

Although the original idea had been to mix the tracks with Mad Professor, things didn’t work out; again hectic schedules got in the way. They were introduced to Brighton producer Prince Fatty aka Mark Pelanconi.

Happy with the setup, the band pushed on. After one final mix from Fatty, some edits and two bonus mixes from Greg Wizard back at Brixton the project, simply called ‘Rhythm Collision Vol.2’, was finally finished. From (unplanned) conception to completion, it’s fair to say that the record has emerged out of numerous collaborations with many talented people, always with the formidable rhythm section of Dave Ruffy and Segs at its’ heart; both are justifiably proud of the finished product.

In 2013 with the record completed and set for an official worldwide release of May 13th, Segs and Ruffy  are performing live shows. Augmenting the line-up with the earlier mentioned organist Seamus Beaghen, singer/dancer Molara and guitarist Leigh Heggarty, the band has been increasingly busy: the mix of new, old and some restructured songs being received well and always make for an uplifting show. Considering the situation they’ve almost inadvertently found themselves in, both Ruffy and Segs are pleased to be back playing together. Says Dave “Ruts DC now, it’s quite a cool handle. I wouldn’t want to go out as the Ruts, but I’m happy to play some new material and mix it up with some older Ruts stuff. It certainly seems to be working. Integrity intact.”