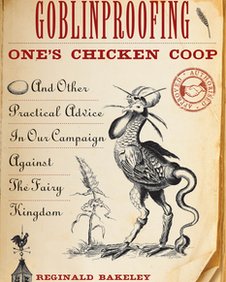 A publication named Goblinproofing One's Chicken Coop has been named as the winner of the Diagram Prize for oddest book title of the year.

The book claimed 38% of an online vote, beating rivals including How Tea Cosies Changed the World and God's Doodle: The Life and Times of the Penis.

The title, written by Reginald Bakeley, gives practical advice on how to banish fairies from your home.
More than 1000 people voted in the poll for the website welovethisbook.com.

The Diagram Prize was set up by Bruce Robinson in 1978 to prevent boredom at the annual Frankfurt Book Fair, with Proceedings of the Second International Workshop on Nude Mice the inaugural winner.

Diagram Prize administrator Philip Stone, charts editor for The Bookseller - welovethisbook.com's sister website - said: "People might think it is just a bit of fun, but it spotlights an undervalued art that can make or break a work of literature.

"Books such as A Short History of Tractors in Ukrainian, The Guernsey Literary and Potato Peel Pie Society and The Curious Incident of the Dog in the Night-Time all owe a sizeable part of their huge successes to their odd monikers."

He added: "The kind of niche, off-beat publications that often appear on the Diagram Prize shortlist might not make their writers or publishers rich beyond their wildest dreams, but the fact writers still passionately write such works and publishers are still willing to invest in them is a marvellous thing that deserves to be celebrated."

Bookseller diarist Horace Bent said: "In Goblinproofing One's Chicken Coop the public have chosen a hugely important work regarding the best way to protect one's fowl from the fairy realm's most bothersome creatures.

"Everyone knows well the hazards cats, dogs and foxes hold for owners of chickens, not to mention red mite, but the public has recognised the need to illuminate this hitherto under-reported nuisance."

The award was accepted by the book's US editor Clint Marsh, who said: "The Diagram Prize celebrates the playfulness that is at the heart of much of the world's best book publishing.

"Reginald and I take this as a clear sign that people have had enough of goblins in their chicken coops. Our campaign against the fairy kingdom continues."

The other titles shortlisted for the Diagram Prize were How to Sharpen Pencils, Was Hitler Ill? and Lofts of North America: Pigeon Lofts.

Previous winners include Greek Rural Postmen and Their Cancellation Numbers, Highlights in the History of Concrete, Bombproof Your Horse and last year's recipient Cooking with Poo.