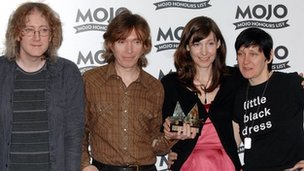 My Bloody Valentine and US singer-songwriter Rodriguez are to headline this year's scaled-down Hop Farm Festival in Kent.

Promoter Vince Power said the festival, the sixth to be held since 2008, would be over two days, on 5 and 6 July.

Previous festivals have been held over three days with headline acts including Prince and Bob Dylan.

"Last year has been tough for me, as it has been across the board for the festival market," said Mr Power.
"I wanted to keep the festival going, but I've had to make changes for it to continue."

Mr Power said this would "allow the organisers to remain committed to delivering a fantastic weekend of music whilst maintaining no sponsorship or branding".

Other acts announced include The Horrors, Jimmy Cliff, The Cribs, The Presidents Of The United States Of America and Martha Wainwright.

Insolvency firm White Maund LLP said an offer had now been made for the Hop Farm business by a company within the Hop Farm Group.

The attraction, at Paddock Wood, is currently closed.

The liquidation was blamed on the recession and continued bad weather, which caused a drop in visitor numbers and a fall in the average amount spent by each visitor.

One of The Hop Farm's biggest annual events, The War and Peace military show, announced in December it was moving to Folkestone after 20 years.

White Maund said on Monday the new management team at The Hop Farm would open the park for the Easter period from Friday until 14 April.

It said there would be a number of new events and attractions for the 2013 season.

The Hop Farm Festival is the third event to be confirmed for the site this year.

A Country, Craft and Food Fair will take place on 18 and 19 May and the Mirror Fest family camping weekend is on 31 May to 2 June.