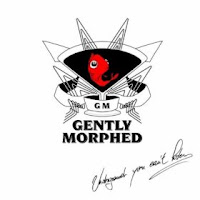 Gently Morphed are a Milan based duo, featuring the talents of Italo-Canadian Max Paxton, and Dany Sigismondi. Together they sing, write and play nearly all the instruments (Paxton’s sister Holly helps out on bass and vocals), and the resultant sound they make is a brash, punk-rooted take on alternative rock. “Underground You Can’t Hide” is their debut album, and arrives after “Digital” and “Bloody Marty” were released as video singles on YouTube, to help prepare the way, and introduce the group to an audience outside Italy. It’s a strong, taut collection, with plenty of influences at play. Musically they’re strident and confident; guitars are at the fore and there are plenty of thrills to be found in their six-string arrangements. The songs ask questions and drag the listener into their world.

There’s no shortage of highlights; opening cut “Something Brought Her Back Again” provides a sterling launch. An early Banshees-esque guitar oozes old-school proto-Goth atmosphere, and Sigismondi’s drums propel with some urgency. Both Paxtons sing, and if rock radio was genuinely interested in playing new, original music, they might just have a hit on their hands.  The fore mentioned “Bloody Marty” employs a stop / start rhythm, a precise, elegant guitar and a rolling vocal that gets under the skin. “House of Blues”, as the title suggests, heads of in a completely different direction, and “The Metropolitans” shows a gentler side. It’s overt pop overtones bring to mind Paul Westerberg, Grant Hart and The Other Kids.
www.facebook.com/GMorphed
www.reverbnation.com/gentlymorphed
www.gmorphed.bandcamp.com
Phil S.