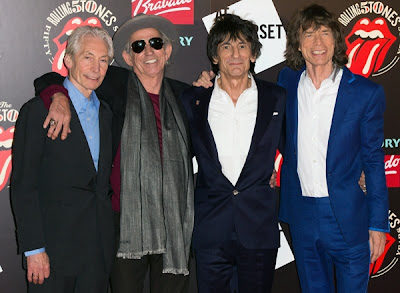 The Rolling Stones have been named as one of the three headline acts for the Glastonbury Festival 2013.

It will be the first time the Rolling Stones have played at the festival at Worthy Farm, Somerset, which will draw about 135,000 people.

The other headline acts at the festival, taking place on the final weekend of June, are Mumford and Sons and the Arctic Monkeys.

The Stones will be performing on the Saturday night - the penultimate night.

Mick Jagger tweeted: "Can't wait to play Glastonbury. I have my wellies and my yurt!"

Glastonbury was not held last year because of the Olympics and to allow the farmland to recover from the previous festival.

The full line-up, announced on the official website includes Primal Scream, Nick Cave And The Bad Seeds and Elvis Costello, with chart acts such as Professor Green and Dizzee Rascal also appearing.

Surprises among the 190 acts include country star Kenny Rogers, who is among the figures playing the main Pyramid Stage.

Names on the Other Stage include Portishead - almost 20 years after they released their debut album Dummy - along with Smashing Pumpkins, Mercury Prize-winners Alt-J and John Lydon's band PiL. The XX, The Lumineers, Alabama Shakes and Foals are included on the bill.

This year's Glastonbury is already a sell-out but there will be some resales next month.