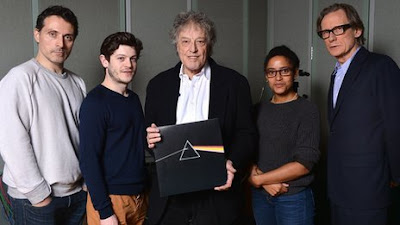 The 40th anniversary of Pink Floyd's 1973 Dark Side of the Moon album is to marked on BBC Radio 2 by an hour-long audio drama by Sir Tom Stoppard.

Dark Side, to air on 26 August, will incorporate music from the album as part of its "fantastical and psychedelic" story.

Bill Nighy and Rufus Sewell will be in a "stellar cast" headed by Misfits star Iwan Rheon and Amaka Okafor.

"I can't think of a better way to celebrate The Dark Side of the Moon's 40-year anniversary," said the guitarist and vocalist.

According to the BBC, Floyd fan Sir Tom was first approached with the suggestion of writing a play based on the album in 1973.

The 75-year-old welcomed the suggestion but had "no idea" how to approach it until recently.

Jeff Smith, Radio 2's head of music, said the play would be a "dramatic examination" of the album's themes, "conflict, greed and madness" among them.

The Dark Side of the Moon has sold an estimated 50 million copies and was recently admitted into the US Library of Congress as part of its National Recording Registry.

Sir Tom's many stage plays include The Real Thing, Arcadia and the Hamlet-inspired Rosencrantz and Guildenstern are Dead.

He shared an Oscar in 1999 for the screenplay he co-wrote for Shakespeare in Love and penned BBC Two's 2012 drama Parade's End.