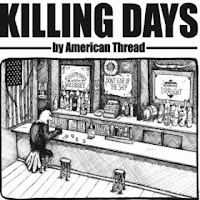 The two main players in American Thread, singer-guitarist Brendan Ahern and drummer Geoff Downing, only got together in 2012, but they’ve made remarkably speedy progress. They’ve already carved out a large, loyal following in their home city of Boston, Mass., and in less that a year from their inception they’ve recorded and released their debut LP.

Recorded with producer, singer-songwriter and multi-instrumentalist Steve Mayone, “Killing Days” is a hard-hitting folk-punk collection with copious influences at play, from Springsteen and Earle to The Pogues and The Clash. They’re a band with a lot to say on plenty of different issues, and they’re not worried about keeping their subject matter local. “Fisherman’s Lullaby” deals directly with the hardships, economic and otherwise, of fisherman working the northeast coast, and although it’s a specific situation that many listeners will know nothing about, like the best folk songs, it tells a story and taps into universal themes.

It’s one of the album’s highlights, and it’s got plenty of company. “Drink for the Damned” is a rollicking Celtic rocker with a banjo driving things along at pace. “Fools Gold” mashes up blue collar Tom Petty and Gaslight Anthem to fine effect, and the title track takes its time, slowly enveloping and unfolding, and there’s no option but to hang onto Ahern’s every word.
www.americanthreadband.com
www.facebook.com/AmericanThread
www.americanthread.bandcamp.com
Phil S.