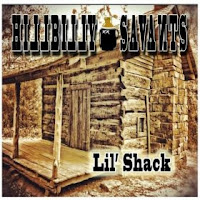 Hillbilly Savants are a four-piece roots-country-blues band from Austin, Texas, led by singer-songwriter Woody Price (he also plays guitar and mandolin). The other guys, JJ Barrero (bajo sexto, vocals), Mike Roberson (bass, vocals) and Jasper Cronin (guitar, vocals) bring a wealth of experience to the band, with CVs that include touring and recording experience with various Texas legends and international artists, including Santiago Jimenez Jr. and the Tailgators, Joe Ely, Ponty Bone, Calvin Russell and RC Banks. I don’t think it’s an overstatement to say they represent some of the crème of the Austin roots scene.

Price has two previous albums under his belt (“Damn Near Broke” and “Diesel and Desire”), but “Lil Shack” is the band’s debut, and it’s a damn near irresistible concoction of Texas styles, guaranteed to fill the dancefloor, or at the very least, put a smile on your face. Price sings his songs with plenty of gnarly twang, and the band play like they thoroughly enjoying themselves throughout. That sort of unbridled enthusiasm is extremely catching, and on upbeat numbers such as “Barrio to the Bayou” and “Le Petite Brigand”, don’t be surprised to find yourself subconsciously jigging about. That’s no bad thing, but expect some odd looks if you’re listening on the bus to work at 7:30 in the morning.
www.hillbillysavants.com
www.facebook.com/Hillbilly-Savants
Simon M.