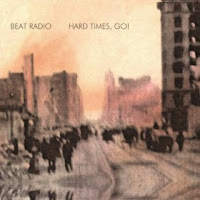 The latest line-up of Beat Radio comprises of just two Brians, songwriter and frontman Brian Sendrowitz and drummer Brian Ver Straten. There’s a concept behind the new album, which is curious, to say the least. It’s an album shaped by hard times (thus the title), and a desire by Sendrowitz to deal directly with what is happening to people in the current economic climate. Nothing too new or shocking there; Bruce Springsteen’s been doing that on and off since Nebraska, and folk musicians have been at it since Woody Guthrie first picked a guitar up, but Sendrowitz had a new idea. He’d recently become enamoured with Swedish electronic pop sensation Robyn and, in particular, her album “Body Talk”. The plan appears to have been to write a Beat Radio album that ‘thematically correlated’ with Robyn’s album.

Sendrowitz is the first to admit that things didn’t quite work out as expected. However, there’s still much to enjoy on “Hard Times, Go!”, even if any clear Robyn influence (apart from the group’s sound being a little more keyboard based than usual) is difficult to gauge. Indeed, the album sounds remarkably like a Beat Radio record, and I’m sure their myriad fans wont be complaining. They begin with the excellent “Hurricanes, Xo”, one of the standout tracks from their recent “Hurricanes” EP (see their Bandcamp page for a generous download deal), and soon the radio friendly indie pop of “Dreaming Wide Awake” worms its way into the skull and takes up an option for long-term residency. I’d charge it rent, but I’m enjoying its company too much. The title track is woozy, sonically obscured and difficult to pin down, “Days Like Diamonds” is disorderly electronic pop, and catchy like a benign Ebola virus, and “Chasing a Phantom” unravels in a spectacularly pleasant way.
www.beatradio.org
www.facebook.com/beatradio
www.beatradio.bandcamp.com
Phil S.