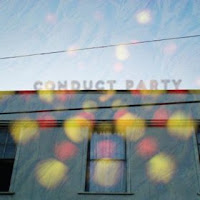 Originally formed in 2009 when drummer Roald Dietzman and bassist Jacob Weaver began playing together; they were quickly joined by Jason Miller on trumpet and guitar, and guitarist / singer, Austin Ryan-Mas - thus Conduct Party was born.

The Seattle-based quartet take their inspiration mainly from contemporary(ish) UK post-punk and indie artists such as Franz Ferdinand and Bloc Party, so clean, funky beats and pinpoint guitars dominate, but equally they haven’t forgotten the importance of proper songs, and there’s no shortage of them on their debut five-track collection. Indeed, opening cut “Terminal Man” is a peach. Rhythmically resolute with a fine vocal performance, it’d sound perfectly at home on BBC6 Music, XFM, or any UK alternative station.

“Clean Slate '08” arrives with a stutter, and then delivers an insistent vocal hook, and a bassline that burrows deep. “Ballistic Femme Fatalistic” begins slower, with an Arctic Monkeys’ feel to it, before sliding into noisier, jazzier realms, and “The Hedge That Wraps Around Our House” is primarily dominated by Dietzman’s discordant drums, but it eventually settles, and the end result is one of the EP’s standout tracks.
www.facebook.com/ConductParty
www.conductparty.bandcamp.com
Phil S.