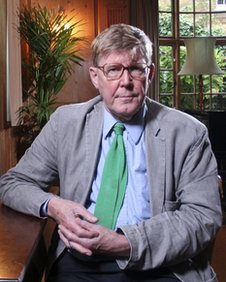 Playwright Alan Bennett is working on a new radio drama for BBC Radio 4 which has been adapted from an old screenplay.

Denmark Hill is a modern day take on Hamlet set in South London "without all the twiddly bits", Bennett said.

Speaking to Mark Lawson on Front Row he said: "I wrote it as a film script and nobody wanted it".

The play, written 20 years ago, was discovered by director Tristram Powell in Bennett's archive.

"It's another play I had forgotten about," said Bennett, who worked with Powell on his 1988 dramatic monologue series, Talking Heads.

The 78-year-old award-winning author and actor's new production of Untold Stories, an adaptation of his 2005 memoir, is transferring to the Duchess Theatre in London's West End.

Comprising of two plays - Hymn and Cocktail Sticks - Bennett explores his relationship with his parents and reflects on his childhood experiences.

Cocktail Sticks contains a story about being "interfered with" by an adult male customer as a boy in a Leeds cinema.

"When I was young, 10 or 12, one often found one's legs were touched up by old gentlemen, in a mild sort of way," he told Front Row.

But he said it never went any further and "it didn't bother me".

The writer said he had been asked by an audience member at the National Theatre whether he felt differently about his play in the wake of the Jimmy Savile abuse scandal.

"They implied that maybe I should alter the plot and that's a ridiculous idea. I did say that wasn't on the cards." he said.

The broadcast date of Bennett's new radio play, Denmark Hill, has yet to be confirmed.

Bennett's full interview with Mark Lawson will be broadcast on Front Row on 20 March.