Review: Craig Robertson – Everything Will Pass

Craig Robertson – Everything Will Pass (Independent) 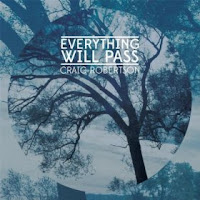 It’s not unusual for music to be written, sung, performed and recorded as a form of therapy, and Toronto based singer-songwriter Craig Robertson continues the tradition on the appropriately titled “Everything will Pass”. It’s an album inspired by a series of events in Robertson’s own life, including the death of parents, divorce and substance abuse. Considering these are ruminations on weighty personal topics, Robertson exercises a lightness of touch that is admirable, and makes “Everything Will Pass” a collection that deserves serious consideration.

Recorded in a style that encompasses folk, country, indie and rock, and sung with a certain frailness, it’s an album which feels a little out of time, though it’s never less than engrossing, and Robertson’s vulnerability adds considerable appeal. The album begins with the country-rock “The Fadeout (Country of a Mind)”. The vocals are mixed low in a full band production, and it sits somewhere between ‘70s Neil Young and early REM. A rolling vocal arrangement and Crystal Harvey-Robertson’s backing voice elevate the title track, and “The Old Stoner” is unadorned and moving. Producer James McKenty provides substantial six-string support throughout and on “This Heart Made of Stone” the band wander into Crazy Horse territory; the result is a fiery rocker, which spits and fizzes with cathartic energy.
www.facebook.com/pages/Craig-Robertson-Music
www.craigrobertson1.bandcamp.com
Phil S.