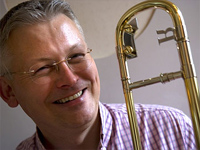 At a recent jazz festival Mark Nightingale mused out loud how strange it was that jazz was dominated by an instrument invented by a man named Adolf! His instrument, the trombone, of course preceded the saxophone in jazz history, and quickly adapted to the rigours of bebop and beyond.

Mark Nightingale's outstanding talent became widely recognised when he won the coveted Don Lusher Award at the age of fifteen. At sixteen he was already lead trombonist in the National Youth Jazz Orchestra of Great Britain and developing his creativity as a composer and arranger.

As well as leading his own quartet and Big Band, the Mark Nightingale trombone has recently been heard with Cleo Laine and John Dankworth, Stan Tracey's Octet, the Charlie Watts Ten-tet, the John Wilson Big Band, the Andy Panayi Quartet, the Alan Barnes Nonet, Steely Dan, the Laurence Cottle Big Band and the Scott Hamilton Sextet.