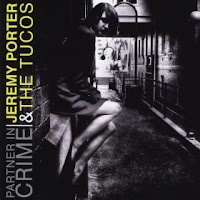 Jeremy Porter’s name is writ large in the annals of contemporary Michigan power-pop, alt. rock and insurgent country. He started out at 16 in the punk band The Regulars, progressed through various outfits, including SlugBug, The OffRamps and Fidrych, and released his debut solo album in 2010. A year later, he formed The Tucos (with Jason Bowes on bass and drummer Gabriel Doman), and I think I can say, without fear of contradiction, that Porter has paid his dues.

Since their 2011 inception, The Tucos have been no strangers to recording. The debuted in the year they formed with the “Night on the Town” EP, followed it in 2012 with the “Live & Acoustic” EP and have now released their debut LP, “Partner In Crime”. Between recording sessions they’ve spent plenty of time on the road, headlining their own shows and supporting artists like Jesse Malin and Whitey Morgan. As a result, they’ve become an extremely tight and accomplished unit, as trios often do, and that tautness and understanding can be heard throughout their new record.

They kick off with “Castaways” a near perfect three and a half minute guitar-pop song, with references along the way to ‘60s beat, the ‘70s new wave and post-hardcore tunesmiths like Husker Du and The Replacements. It’s an utterly enjoyable combination of sounds and styles, and they present them with bundles of spiky energy. “Little Miss Awesome” is completely different; insofar its influences seem modern, and its presentation sleek and decidedly uncluttered. “Goddamn Thing” and “What You're Doing Today” showcase Porter’s winning way with a melody and best of all is “Make Out King” which contains a chorus that’s almost Zappa-esque, without sacrificing a single drop of power-pop charm.
www.thetucos.com
www.facebook.com/JeremyPorterMusic
Phil S.