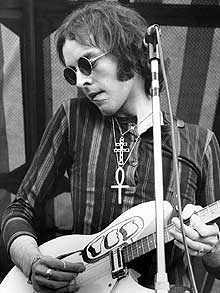 He played on two albums with the group before pursuing his own band Flash, and a solo career which included a guest spot on Lionel Richie's hit Hello.

Prog magazine editor Jerry Ewing said: "He's very much part of the history and the legacy of progressive rock."

Banks died on 8 March from heart failure. He was found at his home after not turning up to a recording studio.

He was working on a live Flash album called Flash - In Public.

A post on his official website read: "It's with great sadness to have to report the death of Peter Banks. He died in his London home on March 8, 2013. Thanks for all the music Peter!"

The band, Yes, are a passion of radio broadcaster and former NME journalist Danny Baker.

Mr Ewing told the BBC: "It's very, very sad. When someone like Danny Baker calls you 'the architect of progressive music', it means something. Something like that rams home quite how important Peter Banks was to progressive music."

Although Banks was in Yes for just a couple of years, Mr Ewing said he was very much part of a wider movement.

"Peter was in Yes when they were formulating what would become their classic sound and they were as much a figurehead of progressive rock in its classic era as the likes of Genesis, Pink Floyd, King Crimson and Jethro Tull," he said.

"He was part of a group of musicians who didn't break rules but they acted like there weren't any rules for themselves, so it was a fascinating time for these guys to be making music."

In 1969, Yes recorded their eponymous debut album, to be followed by Time And A Word, on which his band mates Jon Anderson and Chris Squire wanted the backing of an orchestra.

It caused some eruptions within the group and after the record came out, he was asked to leave, along with keyboardist Tony Kaye, while there was less for them to do.

Mr Ewing had met him during his working life and said: "He was very quiet. I'm not certain that mega rock stardom was really for him. He was very interested in the music.

"After Yes he made some amazing music with Flash and then his solo work as well has always stood up very well, but I don't think the spotlight of fame would have rested particularly comfortably with him."

During his career, Banks released three albums with Flash between 1972-73, recorded with Empire, contributed to all star tributes to Supertramp and The Who and worked with later Yes member Rick Wakeman's son Oliver.

"I loved working with Peter on the many records I have produced over the years," he said. "He always delivered amazing stuff, creative, inspired and always with that classic original Yes flavour that came with his playing. He will be missed by me and many, many other fans of his music and playing."

As for his legacy, Mr Ewing concluded: "He's always going to be remembered for Yes and being the original guitar player as they found their feet and they developed that progressive rock sound."