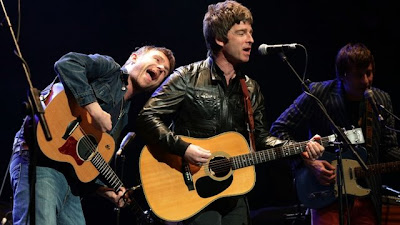 Former Britpop rivals Noel Gallagher and Damon Albarn have buried the hatchet and performed together at a charity concert.

Oasis and Blur were famously engaged in a feud in the mid-1990s as the biggest bands of the Britpop era.

Noel Gallagher caused controversy when he said in 1995 that he hoped Albarn and Blur bassist Alex James would "catch Aids and die".

But Gallagher and Albarn have recently made peace. They shared a table at this year's Brit Awards, with Gallagher later saying they bonded over a dislike of boy band One Direction.

The Oasis star has curated this year's series of Teenage Cancer Trust concerts.

"Who would have thought you would have seen Damon, Graham and Noel singing Tender, and with Paul Weller on drums?" she said. "It sounded great, true rock and roll, and for a great cause."