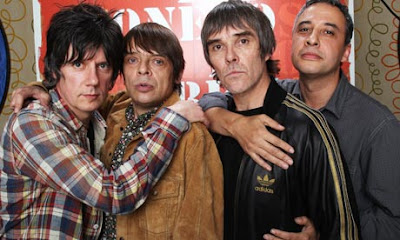 The documentary film which charts the return of Manchester music legends Stone Roses will receive its premiere at a secret location in the city.

The Stone Roses: Made Of Stone features footage from across the band's career and their comeback shows in 2012.

The event on 30 May, which will be attended by the band and the filmmaker Shane Meadows, will be simultaneously broadcast to 100 cinemas across the UK.

The film will be released nationwide on 5 June.

Details of the location of the premiere will be announced when tickets for it and the 100 other screenings go on sale on 17 April.

The Stone Roses, whose 1989 eponymous debut has been widely regarded as one of the best rock albums ever, returned after a long hiatus for a string of gigs last summer.

Their shows at Manchester's Heaton Park in June and July were the first in the UK to feature the band's original line-up for 22 years.

Mr Meadows, who came to prominence with films such as This Is England, Once Upon A Time In The Midlands and Dead Man's Shoes, said he had "unprecedented access" to all three Heaton Park shows to make the documentary.

He said making it allowed him to "be part of something truly remarkable, the double decade awaited resurrection of my all-time favourite band".

"People say that you can't recapture your youth, it'll never be the same second time round, but that's utter rubbish," he said.

"The Roses were never allowed to reach their peak first time around so as far as I and millions of fans around the world were concerned, with this comeback the Roses could be even greater."

He said the film was not "a history lesson, nor is it a two hour concert film".

"It is a film about defying the odds, sticking it to the man and telling the cynics to shut their pie-holes."