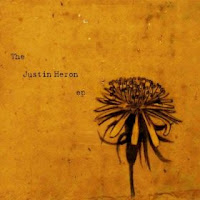 Justin Heron’s debut release is a five track EP that showcases his folk-rock style, whilst leaving plenty of space for the myriad influences that have shaped his musical upbringing. The Milwaukee, Wisconsin native plays regularly in and around his hometown, either solo or as part of a trio (with drummer, Nez and bassist Sam Matteson), and it’s this line-up who play on the EP, with assistance from Patrick Joseph Hoctor on cello and Kristina Priceman on violin.

Produced by Heron and recorded in the chapel of the Milwaukee Newman Center, there’s no shortage of dark atmosphere present throughout the five tracks, and on occasion the effect is quite haunting and ethereal, without succumbing to anything approaching the staged trappings of contemporary Goth.

The EP begins with the crashing intro of “Lay Me Down” though the track soon settles into something more arranged and almost anthemic. Indeed the dynamic acoustic guitars and big chorus bring to mind The Levellers. Middle track “Rag Doll” isn’t as easy to pin down. The soaring vocal, sweeping arrangement, strings and sentiments make it the standout three and a half minutes, from an EP that’s never less than impressive.
www.justinheron.com
www.facebook.com/Justinheronmusic
www.justinheron.bandcamp.com
Phil S.