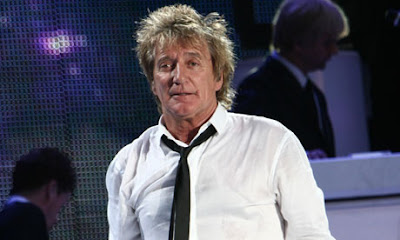 Singer Rod Stewart is to release his first album of new material for 20 years after a lengthy writer's block.

The singer has written and produced all but one of the 12 tracks on the album, titled Time, to be released on 6 May.

The 68-year-old has enjoyed success in recent years with albums of cover versions, including his Great American Songbook collections.

Stewart said his writer's block had been cured after working on his autobiography, Rod, in 2011.

"Something about that process of reviewing my life for the book reconnected me and that was it - I was away," he said.

"Suddenly ideas for lyrics were piling up in my head. Next thing I knew, I had a song called It's Over about divorce and separation."

The singer said he had so many ideas, he started getting up in the middle of the night to write things down.

"I finished seven or eight songs very quickly and I still wasn't done and it became apparent that I would eventually have a whole album of material to record, which had never happened before."

In an interview with BBC News in 2010, Stewart said of his writer's block: "There's many reasons, I don't feel the desire at the moment - I haven't met somebody I feel I can write with.

"It's difficult to get the new material played with us old-timers, it really is. I think we've had a fair crack of the whip, so we can't complain."

He added that he found song writing hard work: "The nearest thing that this business I'm in comes to being a job is when I've had to write songs."