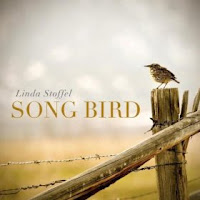 Born and raised on the East Coast of the USA, now residing in the Southern Missouri Ozarks, Linda Stoffel earned her musical spurs with several folk troupes, including Kirby's Dilemma, Coyote and the Davis Creek Rounders. With members of the latter group, she’s recently been involved in the Blackberry Winter Band, an off-shoot of the acclaimed Debra Granik movie, "Winter's Bone", playing and recording the mountain music that was so prominently featured.

As far as I can ascertain, “Songbird” is Stoffel’s debut album release, and it’s an elegant representation of her musical tastes, and the artists and songwriters who have influenced her over the years. All 13 tracks are covers, and Stoffel gets to stamp her own identity on them courtesy of her beautifully rustic soprano voice, and affectionate, gently soothing, acoustic folk arrangements. Members of the Blackberry Winter Band, together with multi-instrumentalist Dave Wilson and pianist Patti Goss, ably assist her throughout.

It’s always good to hear a Kate Wolf song being sung, and here we get two: the unaccompanied “The Lilac and the Apple” and the enduring “Across the Great Divide”. Both are superb renditions. Rodney Dillard’s “There Is a Time” is an early highlight and even when she gets to grip with a pop standard, in this case the Cyndi Lauper radio mainstay “True Colors”, she brings something altogether timeless to her approach.
www.facebook.com/LindaStoffelMusic
www.lindastoffelmusic.wordpress.com
Tony S.