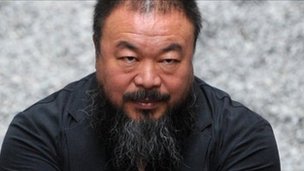 The project, translated into English as Out of Enlightenment, will consist of 1,000 tents along the Emscher river.

Ai Weiwei is currently overseeing production of the tents from his studio in Beijing.

The festival, now in its second edition, will take place between 22 June and 6 October.

Each of the tents being created by Ai Weiwei will have unique features and will be able to house two to three people.

Festival curator, Florian Matzner said visitors to the festival will be able to rent the tents for a night for "a low, symbolic price".

"The idea is to let normal [sic] people participate, and their activities will give the… work its sense," he told The Art Newspaper.

The festival is spread out over 47 square kilometres (18 square miles) between the participating cities of Duisburg, Dinslaken, Oberhausen, Essen, Bottrop and Gelsenkirchen.

More than 40 works of art will be presented for 100 days as part of the festival.

Organisers say it is closely tied to a €4.5bn (£3.8bm) eco-project designed to bring the Emscher river back to life after 100 years of industrial pollution.

Weiwei's installation is reminiscent of his Fairytale People project at Documenta 12 in 2007, for which 1,001 people from mainland China were invited to participate in a visual arts project in the town of Kassel, Germany, to interact with the city and record their impressions.

The project coincided with another installation at the festival where the artist exhibited 1,001 late Ming and Qing Dynasty wooden chairs.

An outspoken critic of the Chinese government, Ai Weiwei was detained for almost three months without charge in 2011. After he was released, he was accused of tax evasion and fined 15m yuan ($2.4m, £1.5m).

As part of his bail conditions the Chinese authorities imposed a one year foreign travel ban on the artist, but he said he was still subject to restrictions when the term ended in June 2012.