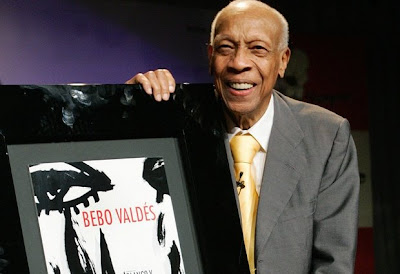 Cuban jazz musician Bebo Valdes has died at the age of 94.

Bebo Valdes, who started his career in the nightclubs of the Cuban capital, Havana, in the 1940s, was a central figure in the golden era of Cuban big band music.

A pianist, he also composed and arranged songs, and led two big bands, as well as creating his own rhythm, the batanga.

He died in Sweden, where he had lived since the 1960s.

Valdes came to fame as the musical director of the Tropicana club in Havana. From 1948 to 1957, he worked as singer Rita Montaner's pianist, also arranging many of her songs.

During his time at the Tropicana, he also performed with US artists Nat "King" Cole and Sarah Vaughan.

In 1963, he toured Europe with the Lecuano Cuban Boys orchestra and, while playing in the Swedish capital, Stockholm, fell in love with a woman in the audience.

He stayed in Stockholm and got married six months later.

Shortly after the wedding, he stopped touring, choosing to settle down with his wife instead.

While he continued to play in hotel piano bars and restaurants, it was not until 1994 that he would record another album, Bebo Rides Again.

The collaboration with Cuban saxophonist and clarinettist Paquito D'Rivera revived his musical fortune.

The film featured Bebo performing together with his son from his first marriage, Chucho Valdes, who is also a pianist and band leader.

The cause of Bebo Valdes's death has not yet been made public.