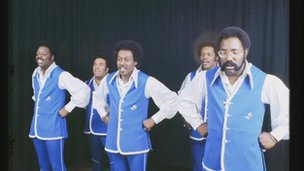 Bobbie Smith (centre) was in the band since high school

Bobbie Smith, the original lead singer of soul group The Spinners, has died at the age of 76 in Orlando, Florida.

The group's management said in a statement on Monday that Smith died on Saturday due to complications from pneumonia and influenza.

The statement added that Smith had been diagnosed with lung cancer in November.

Smith was the voice behind the band's first hit, That's What Girls Are Made For. The band was also known as the Detroit Spinners.

Their biggest hits came in the 1970s, including I'll Be Around, Could It Be I'm Falling in Love and Games People Play.

They all featured the voice of Smith, although fellow lead singer Philippe Wynne had by then also joined the band.

The quintet began in 1955 as a high school doo-wop group called the Domingoes and they were signed by Harvey Fuqua to Detroit record company Tri-Phi Records.

Berry Gordy's Motown label took over Tri-Phi in 1965, but the group struggled to make a big impact on the charts.

It was not until 1972, when tenor Wynne came on board and the group signed to Atlantic, that the hits began coming.

Wynne left the group in 1977 and new lead vocalist John Edwards came on board but the band's producer Thom Bell left shortly afterwards.

The band has continued in various guises since then, the most recent version consisting of Smith and fellow original member Henry Fambrough, along with newer members Charleton Washington, Jessie Peck and Marvin Taylor.

In a US newspaper interview last year, Smith said of continuing to tour: "I look at this like semi-retired. I would miss my fans. As long as I feel good and feel like I can do it, I'm going to keep on. I would be afraid to quit."