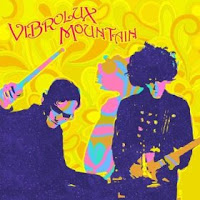 You might think that you’ve never heard Vibrolux, but if you own a TV, then chances are they’ve crossed your path, probably without you knowing it. Their music is regularly featured in films and shows like Flashpoint, House and Californication, and adverts, too. In fact “Spread Your Love”, a track from their 2007 “Ride On” album, is featured on a Dove Men’s advert, currently airing in the UK.

It must me quite a money spinner for the Canadian group, and almost certainly helps finance their myriad recordings, of which “Mountain” is their ninth or tenth, depending whether you count their “Greatest Hits” collection released in 2010. Their latest long player continues their reputation as retro rock ‘n’ rollers with a love of early ‘70s Stones’ records, New York Dolls, classic guitar pop and garage psychedelia. All good things, I’m sure you’ll agree, and Vibrolux bring some fine songs to the project, which is the key to “Mountain” sounding so fresh and vibrant.

Highlights come thick and fast; opener “My Thing” is gloriously brash and intense, with more than a hint of the White Stripes in its execution. The almost instrumental “Drifter” stomps out of the speakers in big silver boots and “Glitter Blues” combines the two with trashy abandon. “Without You” might best be described as indie pop, and is wholly charming, and final cut “You're My Superstar” brings to mind the icy space rock Spacemen 3 used to do so well.
www.vibrolux.net
Phil S.