Review: Ray G. Ward and the Light – I Am You

Ray G. Ward and the Light – I Am You (Independent) 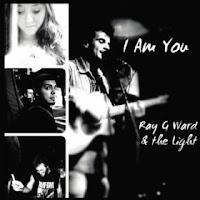 Ray G. Ward and the Light is the eponymous Mr. Raymond Ward on guitar and vocals, Ryan Smith on drums and Enrique Mancia on bass. Colleen Ryan frequently contributes on backup vocals and Ward's father, violinist Michael Ward, has played on all of Ward's recordings so far.

“I Am You” is their second release and their second four-track EP (Welcome To The Real World was released in August, 2012). The core trio are based in central New Jersey, though Ward is a relative newcomer to the area (he was previously a mainstay of the Philadelphia singer-songwriter scene), only moving east and putting the band together in early 2012.

It seems progress has been swift. On “I Am You” they sound like a group playing to each other’s strengths. Their songs always take centre stage, but musically there’s plenty of interesting thing happening, too. Both Ryan and Ward Sr. add a great deal of depth to the overall presentation, and they repeatedly hit a sweet spot with their arrangements.

They open with “Make You Wonder”, with a rolling rhythm and hazy psychedelic pop tones. It’s a strong contender for best track on the EP, but it’s instantly bettered by the title track, a beautifully tempered folk rocker, with a haunting violin mixed low as a counter to the vocals. Quite lovely! Final cut “Rona” is almost as persuasive, and the only minor fault I can find with the EP is that it ends all too soon.
www.facebook.com/RayGWardAndTheLight
www.raygward.bandcamp.com
Phil S.