Review: Phil Edgeley – In The Blood 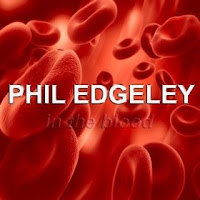 Born in the UK, Phil Edgeley now calls Ettalong Beach, NSW, Australia home. Looking out of my window at the snow falling and the slush rapidly freezing, I can’t help but feel a little jealous; though listening to “In The Blood” it’s obvious the sunshine suits his music. He plays a form of acoustic blues, which accommodates an overt folk influence. Indeed, an early highlight of the set is his cover of Richard Thompson’s “Beeswing” and his take on Dylan’s “Girl of the North Country” is just as effective.

As good as the covers are, original material dominates the album, and Edgeley’s a smart songwriter with tales to tell. Opener “Broke Down Engine” takes inspiration from the Blind Willie McTell song, “Strength in You” utilizes powerful imagery and “Can't Fight Time” tells a basic truth with wit and charm without pulling any punches. It’s an album that flows beautifully, and takes inspiration from artists such as Chris Smither, Martin Simpson and Chris Whitley, and that’s good company to keeps.

“In The Blood” is Edgeley first collection of new material since 2007’s “Then And Now”, and there’s a palpable excitement present in their enthusiastic execution. It’s catching, and as a new convert to Edgeley and his songs, I hope I wont have to wait too long before he finds his way into the studio again.
www.philedgeley.com
Phil S.