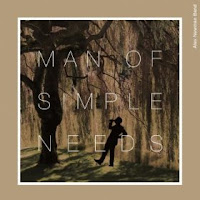 A major draw on the New York City Americana club scene, the Alex Newman Band are rumoured to be equally at home playing on a street corner or in a park. Obviously the band (Alex Newman sings lead and plays guitar and piano. Tony DePiano plays guitar and mandolin. Tyler Erickson drums and Val Celentano plays bass) feel a need to play their music wherever they find themselves, and they transfer their enthusiasm into a studio setting with some ease.

Their debut record “Man Of Simple Needs” is a vibrant six-track collection, which serves as a terrific introduction to an outfit that taps into both the contemporary folk-rock scene, best exemplified by Mumford and Sons and The Lumineers, and something older too. Maybe it’s a Counting Crows influence at play, or perhaps it’s just Newman’s vocals, a big, honeyed, soul-drenched tone that dominates the recording and brings to mind the voice of Adam Duritz.

They get things moving with the record’s title track, a full-on blast of upbeat, fist-punching roots-rock, the sort of thing that helped earn their reputation as a first-rate live band, and it’s just as effective on record. Crank it up loud and I dare you to listen to it sitting down. Slower numbers like “Gotta Good Feeling” and “Oldest, Warmest, Jacket” are just as good; the former is almost Van Morrison-esque, which is rarely a bad thing, and the latter might just be the best song of the bunch.
www.facebook.com/Alex-Newman-Band
www.reverbnation.com/alexnewmanduo
Phil S.