Review: Scott Duncan – On A Bus To Nowhere

Scott Duncan – On A Bus To Nowhere (Independent) 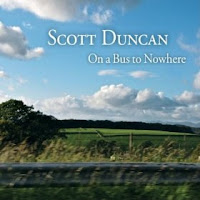 Scott Duncan is a much-respected singer-songwriter from San Antonio, Texas, so much so that he’s twice been a finalist at the Kerrville Folk Festival and has showcased for the Southwest Regional Folk Alliance. His song “November Rain” was featured on the latter organisation’s recent compilation release; you may have heard it.

Story songs and ballads are the foundation of his songwriting style and on his debut LP “On A Bus To Nowhere”, he presents 13 prime examples of his craft. He delivers each song with a voice that’s rich and honeyed, and accompanies them quite simply with mostly just guitar, banjo and a few strings. There’s absolutely nowhere for his songs to hide, and it’s to his credit that the listener is repeatedly enveloped into his tales of love, loss, sorrow and redemption.

Live on stage, in the dark corner of a small Texas club, I imagine the effect is captivating. At home, with the lights dimmed and the CD player gently warming, he’s equally enthralling. The title track makes an instant impression; regret and lost love provide the themes, and the views from the bus, the stark imagery. “Storm Warning” uses heavy weather metaphors to relate current trials and tribulations, and the effect is emotional and direct, and full of dark portent.

Tapping directly into the legacies of both Townes Van Zandt and Johnny Cash, “Down By the River” has it all: love, betrayal, murder and retribution, and “The Place I Call Home” indicates a lighter side, and these contrasts are just one aspect that makes “On A Bus To Nowhere” such an entertaining listening experience.
www.scottduncansongs.com
www.reverbnation.com/scottduncansongs
Tony S.