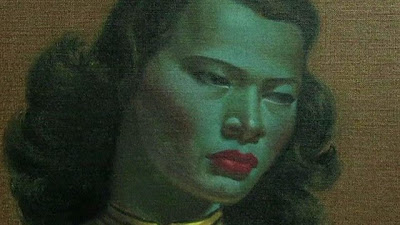 Vladimir Tretchikoff's painting of the Chinese Girl, thought to be the world's most reproduced print, has sold at auction in London for £982,050.

The sum, which includes a 12% buyer's premium, was around twice what had been predicted by auction house Bonhams.

It was thought the portrait of a young Chinese girl with green-hued skin and ruby lips would fetch up to £500,000.

It was bought by British businessman and jeweller Laurence Graff and will go on public display in South Africa.

According to a Bonhams representative, the painting will be exhibited, alongside the rest of the diamond retailer's art collection, at the Delaire Graff Estate, near Stellenbosch in the Western Cape.

The sale, the spokesman added, fetched more than double the highest price - £384,000 - previously raised at auction by a Tretchikoff work.

Tretchikoff, who grew up in Russia and Shanghai, eventually settled in South Africa in 1946 and completed the Chinese Girl in Cape Town in 1953.

In his 1973 memoir Pigeon's Luck, the artist said he had put his "heart and soul" into a painting he hoped had "caught the essence of Chinese womanhood".

Its popularity led to Tretchikoff, who died in 2006, being labelled the "king of kitsch" - though his foundation describes him as "the people's painter".