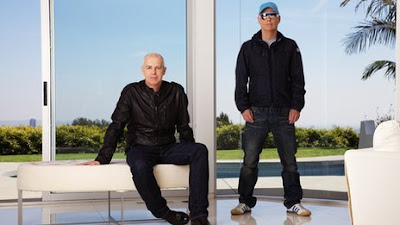 Pet Shop Boys have parted company with record label Parlophone after nearly three decades to sign with a newly-established label.

The veteran chart-toppers, whose hits include West End Girls and It's A Sin, will release a new album through Kobalt Music Services in June.

Bandmates Neil Tennant and Chris Lowe said it was a "very exciting point in our careers".

It was announced last month Parlophone was being sold to Warner Music.

Pet Shop Boys have sold more than 50 million records since releasing their first single on Parlophone 28 years ago.

"We'd like to thank everyone we've worked with at Parlophone over the last 28 years both in the UK and abroad," said Tennant and Chris in a joint statement.

"When we signed to the label in 1985 we had no idea how long and successful a relationship we were embarking on.

"However it is also exciting now to commence a new phase working with a new team in a new business structure."

Parlophone's Miles Leonard said the record company was "proud" to have worked with the group for almost three decades.

"We have been fortunate enough to have been partners in one of the most successful careers in pop culture.

"Neil and Chris to this day influence so many with their incredible song writing and music," Leonard continued.

"We wish them every success in the future and look forward to continuing our relationship with them across their entire and enviable catalogue."

Parlophone, previously one of EMI's most valuable assets, was separated from that company under a deal with regulators when EMI was sold to Universal Music last year.

The company, home to Blur and Pink Floyd, has seen the departure of several artists in recent years, including Radiohead and Sir Paul McCartney.

Kobalt Music Services is a new arm of the Kobalt Music Group, which has become a significant player in music publishing in the last 10 years.

The label issued its first international album last month with Push the Sky Away, the latest release by Nick Cave and the Bad Seeds.