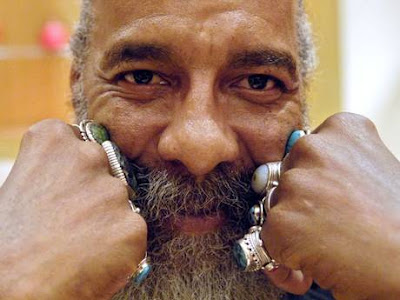 Richie Havens, the folk singer who opened the legendary 1969 Woodstock rock festival, has died of a heart attack at 72.

He died at his home in Jersey City, New Jersey, his agent, Roots Agency, told Reuters.

Born in Brooklyn, New York, the musician was famous for his distinctive guitar and singing style.

Recalling Woodstock, Havens once said: "Everything in my life, and so many others', is attached to that train.''

His improvised version of the gospel song Motherless Child evolved into Freedom at the festival and became an anthem of the 1960s hippie generation.

The Woodstock concert film captured his performance for posterity.

Tributes to the singer have come in, with his contemporary and fellow singer Stephen Stills saying Havens "could never be replicated".

Havens underwent kidney surgery in 2010 and he never recovered enough to perform concerts as he had in his heydey.

He released more than 25 albums and other songs he recorded include versions of Bob Dylan's Just Like a Woman and the Beatles' Here Comes the Sun.

In 1993, he performed at US President Bill Clinton's inauguration.

His family said a public memorial would be announced later and asked for privacy in the meantime.

"Beyond his music, those who have met Havens will remember his gentle and compassionate nature, his light humour and his powerful presence," it said in a statement.

Roots Agency said Havens had been "gifted with one of the most recognisable voices in popular music".
"His fiery, poignant, soulful singing style has remained unique and ageless," it added.

Havens moved to New York City's Greenwich Village at the age of 20 to perform poetry, imbibe folk music and learn how to play the guitar.

Stills said he remembered hanging out with him in the Village.

"Richie Havens was one of the nicest, most generous and pure individuals I have ever met,'' he said in a statement.

"When I was a young sprite in Greenwich Village, we used to have breakfast together at the diner on 6th Avenue next to The Waverly Theatre.

"He was very wise in the ways of our calling. He always caught fire every time he played.''

Woodstock proved the turning point in Havens' career, thanks in part to scheduling chaos at the festival which featured headliners like Jimi Hendrix, The Who and Janis Joplin.

Originally scheduled to go on fifth, he got bumped up because of travel delays. His performance continued for three hours because the next act had not shown up.